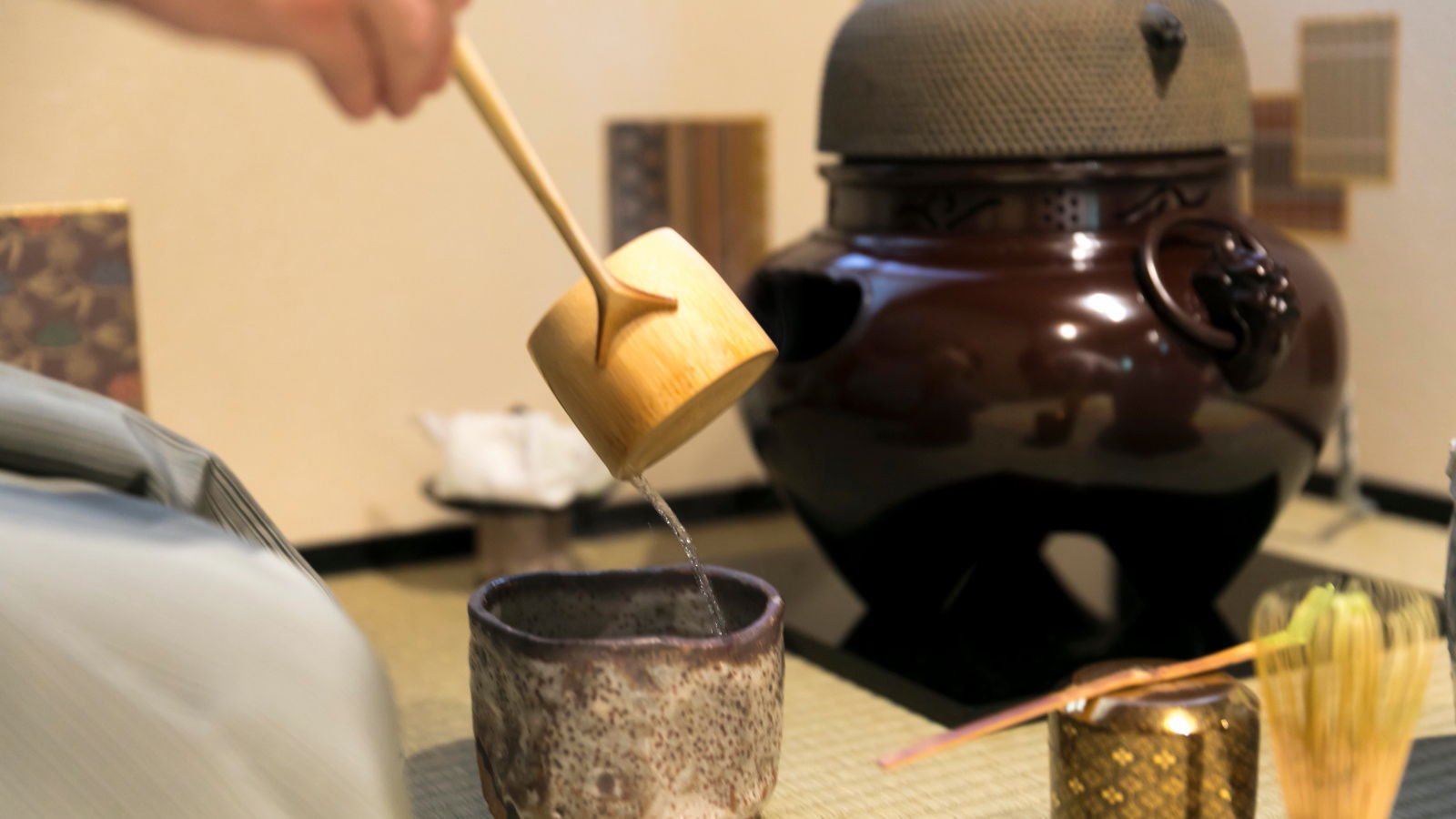 Japanese tea ceremony steps: The framework of a single service of tea

Regardless of the tradition or style in which a service of tea [点前; temae] is conducted, one single such service comprises of several stages the host [亭主; teishu] observes to provide his guests with a bowl of tea and an enjoyable occasion. Each individual stage has a specific function in the unfolding of the service. How these stages are filled in, differs according to the school of tea [流派; ryūha], the season, the layout of the room and even the utensils employed. I will lay out the basic structure of the steps of a basic service of Japanese tea ceremony according to the praxis of the Enshū school. This will function as the framework for understanding the process as a whole, and why the host observes certain procedures.

After the guests have entered the tea-area [茶室; chashitsu・茶席; chaseki], inspected the utensils on display in the alcove and the tea preparation area, and have taken up their seat, the Host will make his appearance. At first he will briefly greet his guests, and then continue with bringing the necessary utensils into the room. Some utensils will already be on display, while others the host will bring in during this stage. The Host will temporarily place the utensils down on a designated area of the utensil-matting-division [道具畳; dōgu-datami] where he will prepare the tea. When all utensils have been carried in, he will close the sliding-door and take position on his primary axis-of-seat [本座; honza] where he will remain during most of the service.

Now ready to begin the service, the Host will ready the space around him for a successful preparation of tea. While taking up the utensils that require dry-cleansing first, and then the utensils that require wet-cleansing, he repositions the utensils around him. Dry-cleansing is conducted using a dry silk cloth [使帛紗; tsukai-bukusa] and is applied on the tea-caddy [茶器; chaki], the tea-flask [茶入; chaire], and the tea-scoop [茶杓; chashaku]. For wet-cleansing, a moist cotton tea-swab [茶巾; chakin] is used to wipe the tea-bowl clear of any remnant moisture.

It may sound peculiar that the Host decides to, once again cleanse the utensils during the progress of the service, when they should have already been tended to in the preparation-room [水屋; mizuya] before the start of the service. More than this being a practical matter, the cleansing during this stage is a token of care and respect towards the guests. The Host has selected these implements for the joy and appreciation of the guests. And through cleansing them again in front of them he expresses his indirect care and attention for their presence. It non-verbally communicates that the host has tended to everything with utmost care. And that each and every single object employed is presented in the purest state possible. It also assures that the guest is not only left to ‘assume’ that everything is ready. It actually allows them to confirm together with the Host that nothing is amiss.

When all the utensils are purified and positioned conveniently, the Host is now ready to serve tea. During this stage he will prepare tea and set it out for his guests to receive. Remarks about the tea, or questions regarding its origin may be made. Occasionally, when thin-tea [薄茶; usucha] is served and when plural guests are seated in the room, the Host will continue making further bowlfuls. He will then revert a few steps in the cleansing stage and cleanse the tea-bowl before making tea again.

When no more bowlfuls are requested, or when everyone has received their portion, the Host briefly replenishes the hot water from the cauldron [釜; kama] with cold water from the cold-water-vessel [水指; mizusashi]. He will then shift his attention to the tea-bowl that has now returned.

In attempt to re-instigate the original state of the service, the Host will purify the utensils once more, and eventually place them back in their original position. He will also replenish more of the hot water he has used with fresh cold water, and eventually at the end of the service, also replenish the cold water if the cold-water-vessel is to remain in the tea-area.

In the past fellow tea aficionados would call on each other after it was rumoured that someone was holding a tea-occasion [茶事; chaji]. Commonly they would wait until the gathering concludes to drop by for a brief look at the utensils that were in use that day. And on most occasions for a quick bowl of tea. It is for such sudden occasions that the Host re-sets everything to its original state. It is also neat to tidy up after having made tea, for the comfort of the guests.

Step 6:
Carrying the utensils out

When all utensils are purified, placed back in their original position, and water has been replenished, then inquiries may be made about inspecting the vital utensils. The Host will give them a final cleansing, and present them to the guests for inspection [拝見; haiken], which will be discussed below. Having set out the utensils, he shifts his attention back to the remaining utensils, which he will carry back to the preparation-room.

To allow the guests some privacy with the vital utensils, the Host closes the sliding-door. During this time, the guests take the presented utensils in their own hands and inspect them in greater detail. The tea-environment is usually dim-lit, making it difficult to see the detail on utensils that are somewhat distant. During this precious occasion, guests may view and feel the utensils, and exchange comments about them with their fellow participants.

Once everyone has had a chance to examine the utensils, the final guest places them back for the Host to receive. The Host will have estimated the time to re-enter the room. He makes his re-appearance and allows the guests to ask further questions about the displayed objects, or provides further information [問答; mondō].

This time the Host will also take the vital utensils back to the preparation-room, and one last time will he sit outside of the tea-area to address his guests with a final apology.

Q&A HOW DID YOU BECOME A TEA MASTER?

THREE QUESTIONS ABOUT TEA CEREMONY I OFTEN GET ASKED