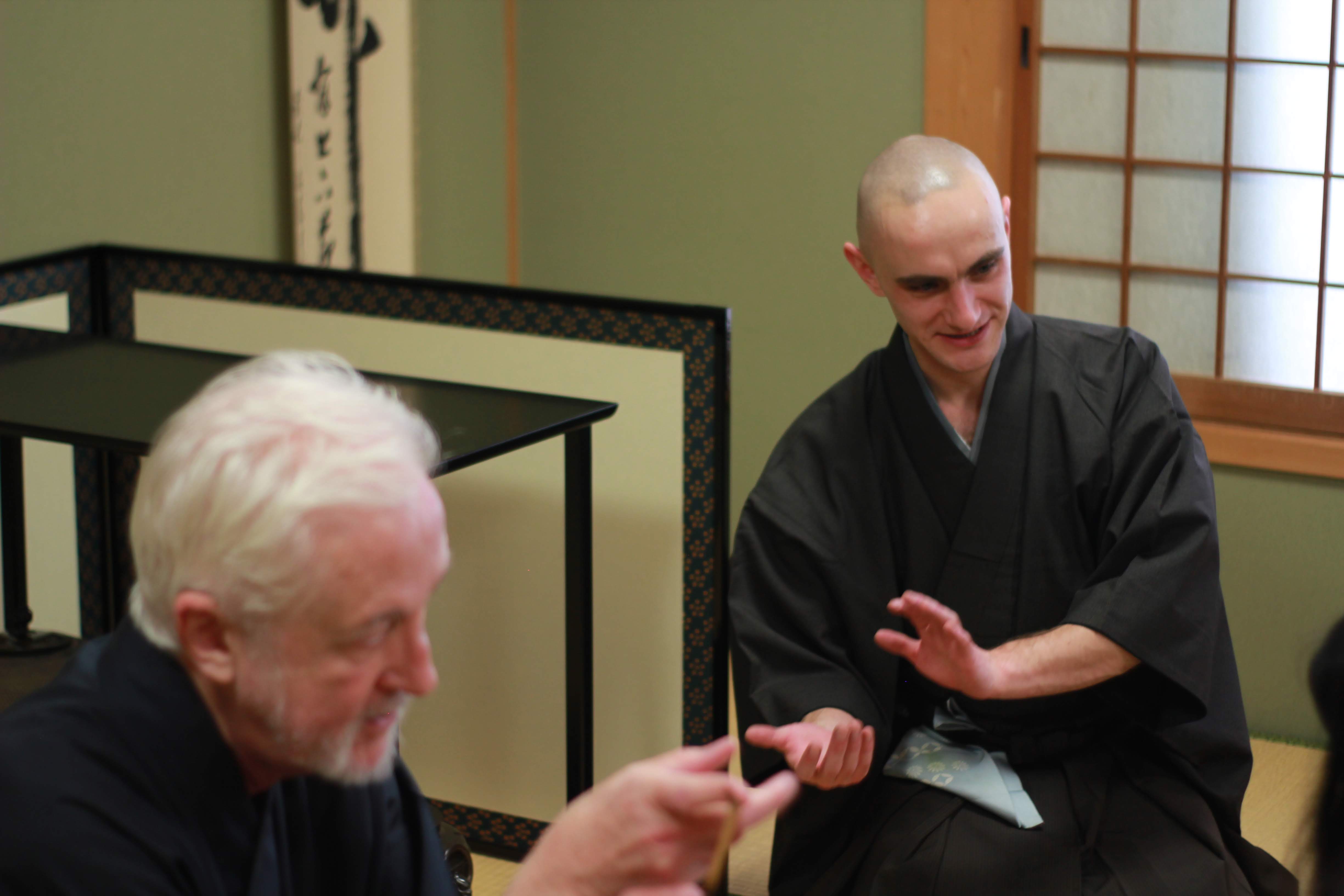 What are Japanese tea ceremony schools?

Schools of Japanese tea ceremony are not institutions in the way we envision a contemporary school as a high school or university. There are teachers, but they are not bound by a curriculum. Nor do students gather at a schoolhouse where teachers teach classes on various aspects of the tradition.

Individual teachers may have rented a (‘class’) room where they conduct their teachings, but the building is usually never owned or organized by the ‘school’ of tea the teacher belongs to, nor is the progression of his/her lessons prescribed by the curriculum of the school, or are students grouped in classes of advancement. Each pupil is treated individually, according to his/her stage of advancement and preference of learning. Pupils can, to an extent, choose their own point of learning, in which then the teacher will guide them.

The content of the lessons and the way pupils are guided is however different for each school individually. And when I speak of a school, I in fact refer to a style. Japanese tea ceremony schools are as much a school, as the school of Rembrandt is a school of painting. Teachers guide students through certain protocols, but the final intention is to train students of tea ceremony in the aesthetics, philosophy and ways of conduct that are in accordance with the style of tea ceremony practiced in that specific school.

Schools of tea commonly don’t have courses, nor is there a set term for learning. Repeated practice in that style is considered the only way to internalize the underlying principles and values of the style of tea being practiced. Training is considered a life-long endeavor, and although grades of advancement can be obtained, these are not considered as an acknowledgement of achievement, but rather as the permission to progress to the next stage of learning.

The purpose of learning tea ceremony

This learning is a day-to-day practice, for the knowledge and understanding is fleeting. Unlike riding a bicycle – which we remember how to do for the rest of our lives – this is a skill that requires continued attention and upkeep. It is a matter of awareness, focus and will, rather than a matter of knowledge. The above is one example of what the art of tea helps us do. Through continuous training in tea ceremony, we indirectly embody the inner emotions we wish to cultivate. Because through altering our actions, we can alter our emotions, and in effect change our habits and subconscious mind. For serving tea to become natural to us, we require continuous practice.

The benefit from training in a school of Japanese tea ceremony

The above is one example of what the art of tea helps us do. Through continuous training in tea ceremony, we indirectly embody the inner emotions we wish to cultivate. Because through altering our actions, we can alter our emotions, and in effect change our habits and subconscious mind. For serving tea to become natural to us, we require continuous practice.

A school of tea is the means for us to do so. It is a style in which to train, in order to internalize the very essence of existence within us. Tea is the tool through which we cultivate awareness about the universal values that oil the engine of human existence, and through which we imprint those essential habits within our preconscious mind for the sake of self-cultivation and a richer personal existence.

Styles, rather than schools.

All the ‘schools’ of Japanese tea ceremony teach with the same intention, and they aim for the same goal. The way that goal is reached differs from school to school. I often compare this to the various religions. Although religions are different in the way prayers are conducted, or protocol is prescribed, their intentions are the same. They aim for peace, and man to be good.

So do the various schools take different approaches to teaching, and are the protocols they instruct different from one-another. Nevertheless, the intention with which they conduct their teachings is the same. It is to teach and train their practitioners to serve tea with a pure and selfless heart. It is this superficial outer layer of conduct that differentiates styles and opposes them to each other.

Warrior tea [武家茶道; buke sadō] & Merchant tea [町衆茶; machishū-cha] are two groups of tea ceremony schools that derive their names from the social castes in which the styles originated.

Warrior tea is the group that enlists all school of which the initial founder of the school belonged to the warrior class. Most of Rikyū’s disciples were warriors or feudal lords. And they adapted the tradition to their own social requirements and preferences.

One of Rikyū’s direct disciples was Furuta Oribe. His line of succession is formalised in the Oribe-ryū style. One of Oribe’s disciples again was Kobori Enshū, whose aesthetically refined ‘kirei-sabi’ style is being passed down in the Enshū-ryu; and of which also exists a branch style called Kobori Enshū-ryu.

Most schools of Japanese tea ceremony as they are known today have their origin starting after Rikyū’s death. The persons we call founders of a school, or the line of succession, usually didn’t have any intention whatsoever to start a school or tradition. They practiced tea and learned from each other to improve their own styles.

Kobori Enshū was a disciple of Furuta Oribe, though if we look at the distinctions between the traditions of both, we see great differences in style and conduct. Enshū must have learned from Oribe, not in a way as we would learn from a teacher nowadays, to copy his style, but to gain hints from Oribe’s approach to tea in order to improve his own style. It may be more accurate to refer to Oribe as Enshū’s mentor, rather than a strict teacher, in the same way as we would call on a business mentor nowadays. Not to simply copy his business model, but to gain insights on how to improve our own approach to our own unique business.

Strict successors however emerged, and they carried the teachings from those masters on, codifying them, and transmitting them as absolute truths.

New schools emerged too in a later stadium when lineages had already formed. Those schools were intended to be passed on and transmitted, and the founder in fact founded the school with the sole intention for it to become a school of tea ceremony. One such example is Kawakami Fuhaku, the son of a military vassal who had studied and received full accreditation from the Omote Senke school. When he moved to Edo – present day Tokyo – he instructed students, first in the Omote Senke style, but later changed the name of his school to Edo Senke between 1750 and 1760. He thus founded a warrior style school of a merchant style lineage of tea, approximately one hundred years after Rikyū’s death.

The Nihon Sadō Gakkai was founded in 1898 by a disciple of the 13th grandmaster of the Urasenke school. The founder, Tanaka Senshō, felt that contemporary tea ceremony was too overtaken by the notion of schools and styles, that we have forgotten the true essence of tea ceremony. He proclaimed that until the time of Rikyū, schools didn’t yet exist, and that we should return to an approach to tea ceremony that was free from the notion of schools, styles or lineages. The school originated as a group of people who wished to freely study the differences of tea schools, and use this knowledge for the creation of fresh, new approaches.

Although the intentions of the institution were to study and research tea ceremony from a free and broad perspective, its final model however was taken after the example of other existing schools. The head of the school was in fact similar in rank and status as the grandmaster of another style, and the protocol thought in the school, whilst being a mixture of approaches from various schools, became the sole true way of conduct for the students at this institution.

Trying to get away from the contemporary boundaries that the notion of styles imposes on the praxis of tea, this institute in fact created another school in the same vision as the other pre-existing schools, instead of proposing a new approach to tea ceremony as a whole. The foremost reason for this is undoubtedly the fact that no other superior model of organization existed that could gather and maintain student incomes that well as the existing model of tea schools – and in fact that of religions too – could do to retain and receive continuous income from students.

Q&A WHAT IS MATCHA TEA?